From the early 1950s DeSoto, to the muscle-bound Chargers of the late 60s and early 70s, to today’s Hellcat Challenger, nothing says power like a Hemi engine. The innovative design of the Hemi’s combustion chamber allowed Dodge/Chrysler/Plymouth to lead the way in increasing the efficiency of gas burning engines. Hemi has become synonymous with power and many non-Chrysler race cars run a Hemi engine. Today’s Hemi, is a different beast than its earlier cousin. Anyone who worked on the late 426 Hemi in the 60s and 70s can tell you that. They are, however, definitely from the same family tree. Powerful, fast, and ready to take you anywhere you want to go, that’s Hemi power.﻿﻿﻿﻿ 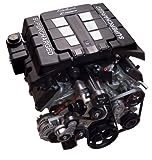 A Hemi engine is an engine in which the combustion chamber and the heads have a hemispherical shape. This shape allows the engine to burn fuel more efficiently and reduces overall heat loss which increases horsepower. The arrangement of the valves allows for increased airflow, which also increases fuel efficiency. The 5.7L Gen III Hemi was born in 2003 after years without this legendary engine on the road. Let’s tear it down.

Two features not found in the original Hemi engines were MDS and VVT. MDS stands for multiple displacement system which allows the main oil galleries to send oil directly to the solenoids that disabled the lifters. The oil for the lifters then comes down through the pushrods. VVT stands for variable valve timingand required a new block with an extended front cam bearing. Three additional oil passages had to be incorporated to supply oil to the cam.

The front of the block sits flush with the side rails on the timing cover. This allows for the oil passage needed to supply the extended cam. The oil passage connects to the main oil gallery and then to the oil control valve before connecting to the cam. On the left side of the block, the hole for the temp sender was removed, and they added a bolt boss halfway up the block. 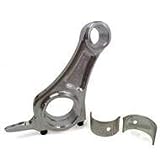 The rods, made of forged, powdered metal, were redesigned to increase strength. They needed to be stronger since the VVT motors make significantly more horsepower and torque than the original rods. Although the rods from the early Hemis look identical to the ones today, it is not recommended to use them in today’s Gen III Hemi because they are not as strong and would not hold up to the demands of the engine.

They modified the pistons in the Gen III Hemi engine to fit into a narrow ring pack. That is the only change that was made to the pistons and they look the same as the previous generation of Hemi engines’. 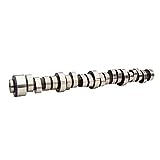 There are five different cams and they are not interchangeable. The cams are each unique in the four of the intake compartments. They have a primary ramp to pull up the locking lash in the MDS lifter. This has to be done before the secondary ramp closes a check ball in the lifter. They are not interchangeable because the timing on each of the compartments is set forwards a few degrees. The following are the five﻿ vehicle groups that the cams﻿ fit: 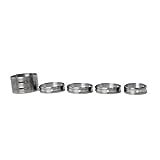 The Hemi engine uses a bearing set with a wider front bearing. It has two slots that line up over the grooves in the cam journal. The third bearing is coated to improve durability during cold weather use by reducing friction on the cam.﻿﻿﻿﻿

VVT cams have more lift, so the lifters were modified to make up the difference. On VVT lifters the flats on both sides are wider than on earlier lifters. The pushrods are slightly longer since the head casting was pushed up to make room for the exhaust. 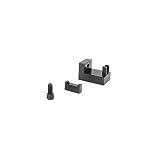 Since 2009, all Hemi engines have a cam phaser. The cam phaser provides variable valve timing (VVT) which improves air flow through the engine. With VVT, the cam can be advanced to increase torque during everyday driving allowing the engine to operate on four cylinder. ﻿﻿﻿

The heads on the 5.7L Gen III Hemi engine are oval rather than the hemispherical shape of the early model Hemis.

The high volume oil pump is a gerotor design. It is still bolted directly to the bulkhead on the front of the block. Oil pumps are interchangeable.

The original 32-tooth crank sensor wheel had to be upgraded to a 58-tooth wheel, so the computer had more accurate information regarding the position of the crankshaft.

The timing chain has three laser etched rectangles that are used to time the gears. The chain runs on a cam thrust plate, a plastic chain guide and a tensioner with a spring-loaded piston.

Th﻿e Story Of The Hemi Engine

A Legend Is Born

In 1948 Harry Westlake created a Hemi 6-cylinder engine for Jaguar, and so a legend was born. It wasn’t until 1951 that Chrysler introduced its Hemi V-8, 5.4 liter engine, which put out an unheard of 180 hp. This first Chrysler Hemi was known as the “331 Hemi”.

Chrysler would not rest there, not with competition coming from Ford and Chevy. They kept working to improve the design of the Hemi and in 1956 Chrysler released a 354 cubic inch Hemi engine. This was followed a year later by a 392 cubic inch design. In 1964 Chrysler released a new design that was based on the 413/426 wedge head motor and the 426 Hemi engine was born. The 426 gave the legend of the Hemi engine its power.

In 1964, the 426 Hemi, which was rumored to produce 600 hp, took the Daytona 500 NASCAR race by storm when it took first, second and third place. Richard Petty led the way, easily taking first place in his 1964 Plymouth. Insurance companies in 1964 would not allow the 426 Hemi to be used on the street. So, in 1965 Chrysler produced the 426 street Hemi which only produced 425 hp.

From Flathead To Hemi

Until 1950, cars used flathead engines. The design of a flathead engine has the valves inside the block and they open into a chamber next to the piston. On a flathead the head itself is ﻿simple, just a solid metal casting with a hole for the spark plug. There are no pushrods or rocker arms because the camshaft pushes on the valves stems to open the valves. Simple, but not the most fuel efficient design.

Hemis for stock-car racing had a single Holley four barrel that rested on top of a high rise intake manifold. They were coupled with a four-speed manual gearbox. For drag-racing, Hemis came equipped with a ram-tuned aluminum induction system with Carter AFB dual quads joined to a four-speed or a Torque-Flite automatic transmission.

No doubt, if you are a Mopar enthusiast, you would love to get your hands on a Hemi engine. If you can’t afford the price tag of a brand new Hemi, be patient. Since Chrysler has been selling Hemi trucks for years, there will soon be used trucks on the market with those awesome Hemi engines, just waiting for you to come along. ﻿﻿And the engineers at Chrysler still aren’t resting. The next Hemi engine that is coming down the pipe will be even more of a beast, the perfect solution to power all your towing needs.

As a participant in the Amazon Services LLC Associates Program, Best-AutomechanicsSchools.com may earn from qualifying purchases. We may also earn commissions on purchases from other retail websites or enrollments in programs listed.

Auto mechanic training involves hands on experience, learning how to troubleshoot, and the business side of working at an auto shop.

Some high schools provide basic shop and mechanics courses, others have joined with Automotive Youth Educational Systems (AYES) to bring advanced instruction to the classroom.